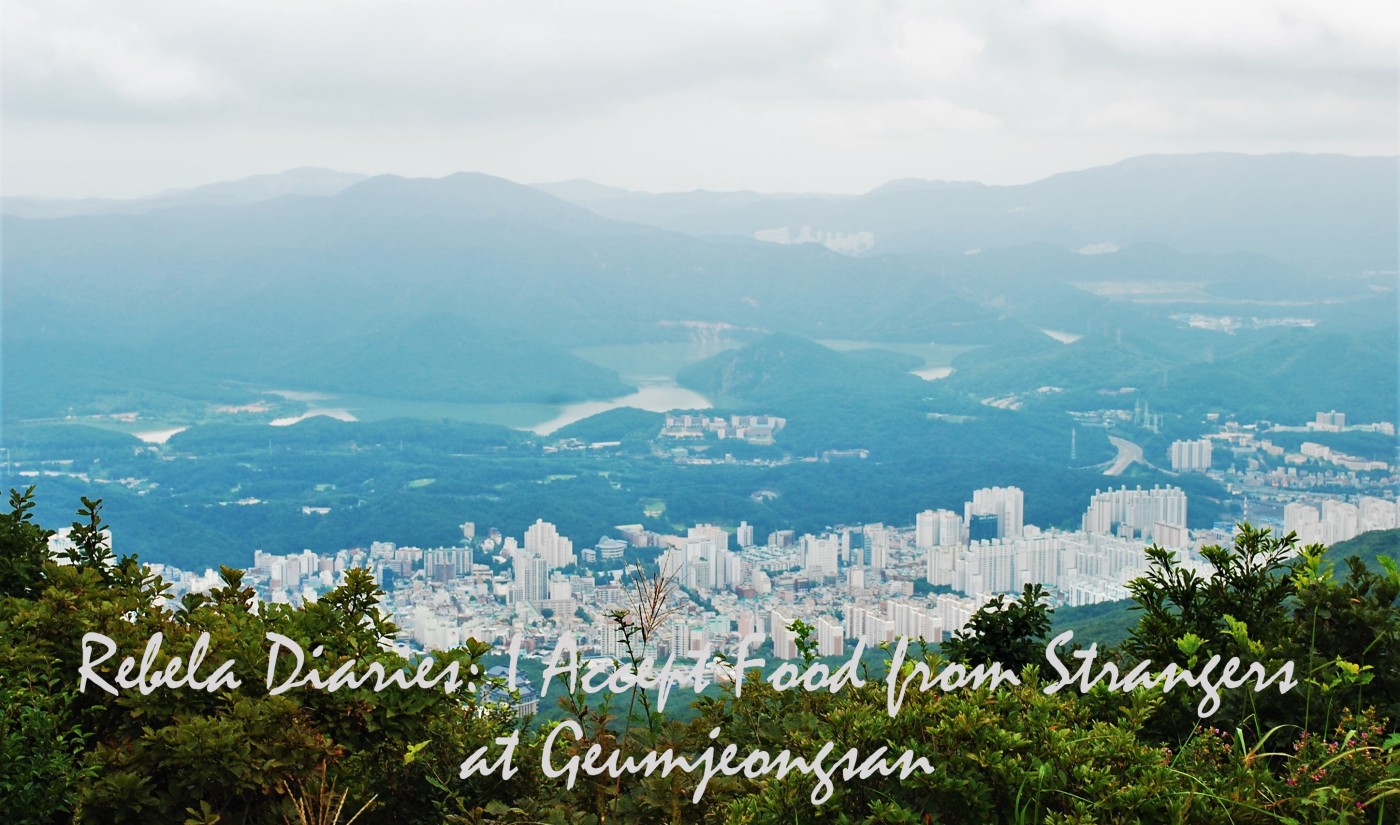 Wherever I go, I like looking at the place from above – a tower, a lighthouse, a mountain. Being high up gives you a better perspective, reminds you how very little you are in this big world.

In Busan, there is Geumjeongsan, an 800-meter mountain fortress. On our third visit to South Korea, my friend Queen and I thought we should go hiking for a change.

We set off for Beomeosa Station, took Exit 5 and walked a few minutes to the Samsin Bus Stop. Taking Bus 90, we got off at the Beomeosa Temple Ticket Office, our gateway to Geumjeongsan.

As always in South Korea, our ignorant looks, heads bobbing from left to right, immediately called someone’s attention. Without even asking for directions, a kind harabeoji (grandfather) called on us so that we could walk with him towards the temple. 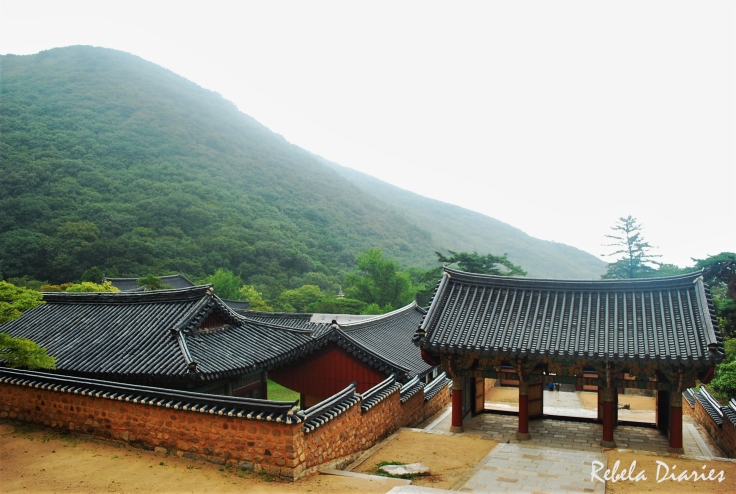 He proceeded to do his prayers while we looked for the path to the foot of the mountain. As luck would have it, it started to rain. And such was our faith for great weather that we did not bring an umbrella. But I guess that was the universe reminding us the beauty of taking a pause.

Beomeosa Temple, first built 1,300 years ago, was destroyed during the Japanese invasion in 1592. The one we see now is relatively younger at 300 years old. Regardless of age, there is such a strong sense of devotion here that gives one a feeling of peace. We were not in a hurry for the rain to stop. 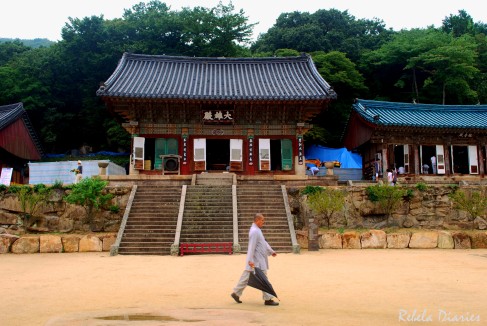 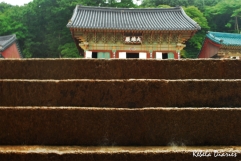 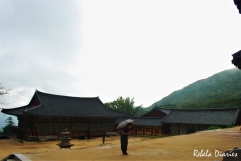 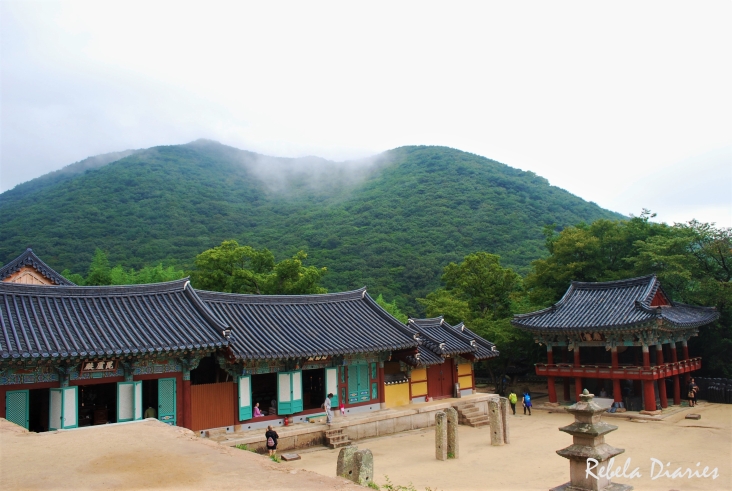 But it did pretty soon. We headed to the left side of the temple to begin our climb. The hike was pretty breezy for summer – the lush forest protecting us from the sun’s full force, the occasional stream keeping the air cool and misty. I was wondering where all the ahjummas and ahjussis were, I’ve read they climb by the dozens on a daily basis. My mom doesn’t even want to take the stairs nowadays and there they are climbing mountains for fun.

As we reached the first clearing about an hour later, I got my answer. Of course they set off much earlier than we did. They were already there ‘hanging out’ in makeshift benches, you know, because parks are too mainstream. We seemed like two kids lost in the land of elders, very friendly elders. Everyone we came across asked eodiseo osyeosseoyo (where do you come from?), followed by bangapseumnida (nice to meet you). I could not get used to how hospitable and friendly the people in Busan are.

We walked a little further to get to the peak, and found that the descent would be much harder than the climb. How could we just leave this view? 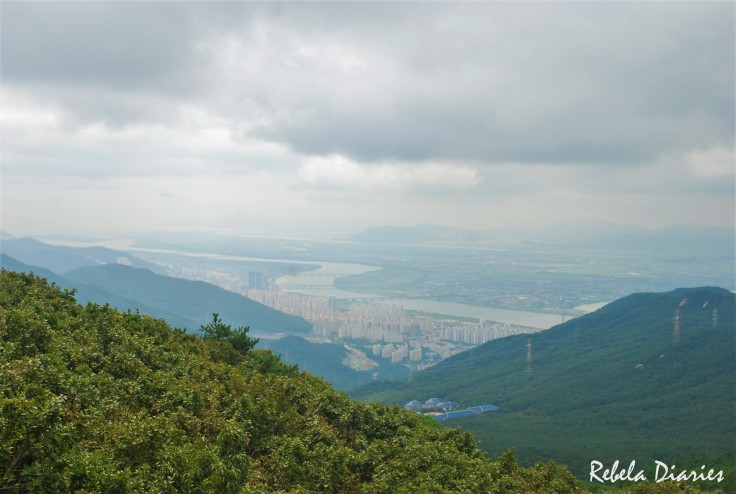 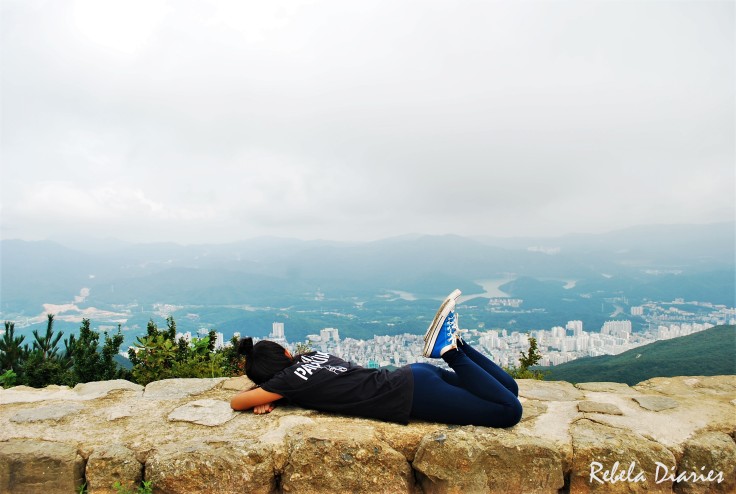 Several people stopped to talk to us, even though we understood very little Korean, and they, very little English. That’s always the case here in Busan. They’re not used to foreign tourists yet. I hope that doesn’t change.

I ate my egg sandwich and regretted that I didn’t bring more food. With stomachs grumbling, we were forced to move on. 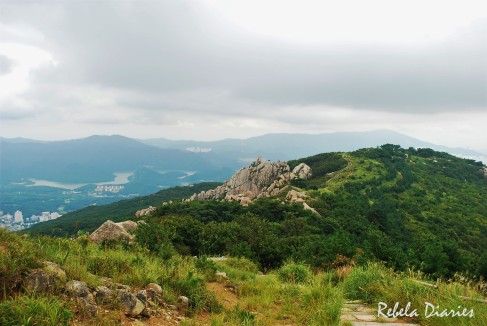 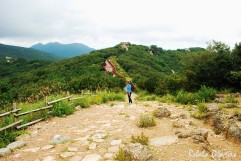 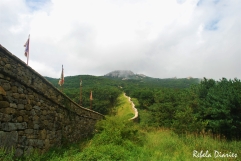 We walked along the stone wall of the Geumjeongsan Fortress, believed to have been built in the 1700s, to defend the country in case of another Japanese invasion, which actually happened again in 1910-1945, destroying most of the fortress. 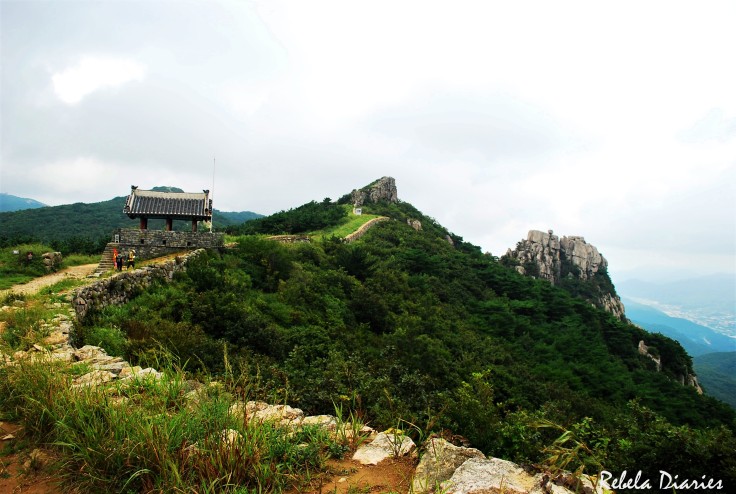 We reached a small pagoda overlooking the city below. There were more ahjummas and ahjussis here, eating their lunch. We greeted them as we came in. We were enjoying the view when one ahjussi offered each of us a slice of pear. We tried to refuse, but he insisted. It was the sweetest pear I’ve ever had.

Another ahjussi tapped us to offer some twigim (Korean deep fried dish). It was a blessing for our raging tummies. Two ahjummas, who were walking out of the pagoda, decided to go back at the last minute to give each of us a choco mallow pie. None of them really talked to us, probably did not want to burden us with the language barrier, but that didn’t stop them from showing us kindness.

My mother always said never to accept food from strangers. But how could I reject anything from these beautiful people? With hearts full, we left the pagoda before they start thinking we’re waiting for more food. 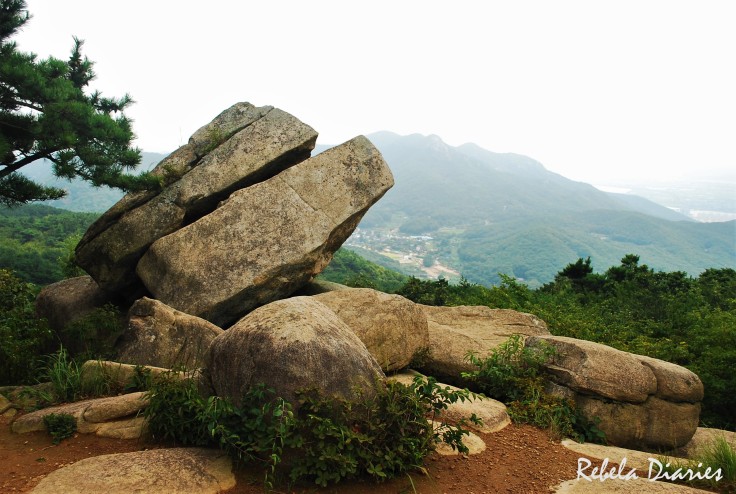 It really was an easy trail, but we decided not to hurry. Most of the time, it was just the two of us alone in the path, enjoying the solitude and the beauty of nature. Occasionally, we would stop to enjoy the mountain’s stunning rock formations and the view below. 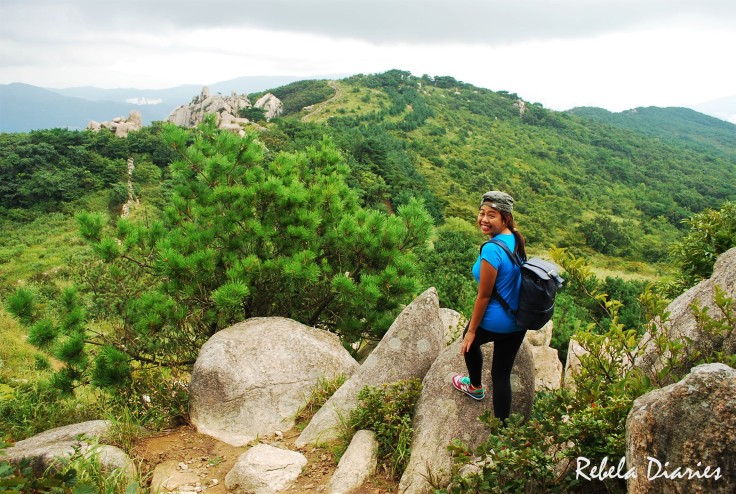 We were in one of those moments when three ahjummas arrived, saw me taking a photo of Queen, and offered to take photos of the two of us together. They were smiling and laughing and I wondered what was so exciting about taking someone else’s photo.

Well, that was until they started directing our poses. If you don’t know yet, Koreans can be very creative with their selcas, and our photoshoot was no different. 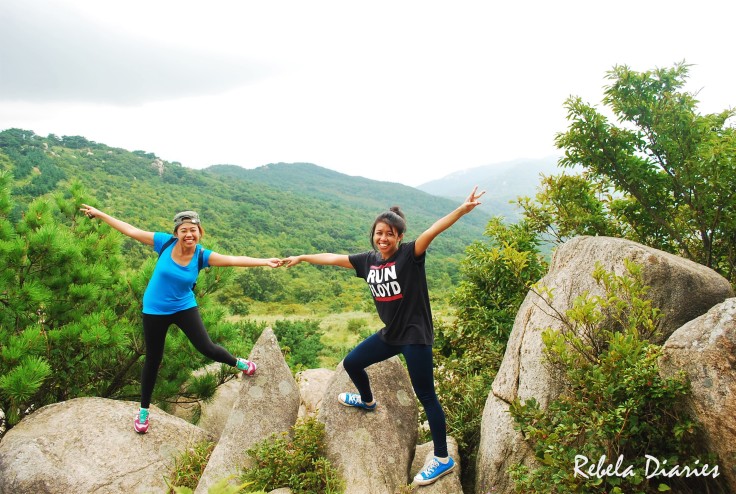 It took maybe less than 5 minutes, but it was the most fun we had in that climb.

My friends always ask me why I keep on going back to South Korea, hindi ba ko nagsasawa? Well, if you’ve ever been here, you would know that every alley holds a secret, and every corner was designed to be both beautiful an useful. You would literally never run out of chances to scream yeppeuda! (pretty!).

But that is not what I keep on coming back for. It’s the beauty and kindness of their people. Their habit of going out of the way just to help you out; their effort to reach out to tourists, trying to understand with actions what they could not do in words; their ready smiles and infectious laughter.

Anywhere else in the world, getting lost is just another adventure. But here in South Korea, getting lost is a chance to meet new friends, who will get you where you need to go, even if that means personally taking you there. It’s the only country I’ve been to where the people could rival the hospitality that the Filipinos are known for, which is probably why I decided it would be my second home.

Without a map, a hike to Geumjeongsan is a game of chance for tourists. The paths often break out to lead you to various gates and peaks. Sure there are signs, in Korean. And even though Queen already knew how to read Hangeul at that time, she didn’t know what they meant. Haha But we were not bothered in the least. We were in Korea, we would always find our way home. And we did. 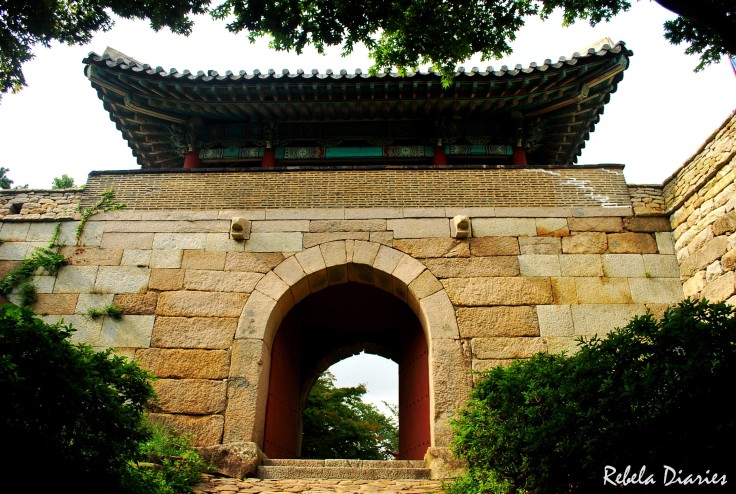 Someone once told me, 'know the rules, so you can break them.' So here I am, breaking rules in the most beautiful places in the globe. Care to join?