The time was almost midnight. It was our first night at our bamboo cottage. We looked around and wondered whether the nipa wall could survive an attack. From what, we didn’t know. The horror legends are enough to scare us out of our wits. We hear a scream just a few meters behind our cottage. It was a girl. It was one of pure terror. Then nothing. We stared at each other as we listened for any further noise. Nothing. That was creepy.

We looked around and noticed our nipa walls were designed with cross patterns. What does it mean? A subtle way to ward off evil?

I double check the doors and windows. Everything’s closed. I open the bottle of holy salt my mom gave me before I left home. That doesn’t calm our flaying nerves.

We lay in bed, thinking we won’t get any sleep that night. I fell asleep in less than five minutes. Next thing I knew, the sun was up. It was a beautiful morning. We were safe.

We never really knew what happened to the girl who screamed. But no one searched for anyone or complained about anything for the rest of our stay. The morning was so peaceful for creepy thoughts. We moved on.

It’s easy to think the worst horror stories when in Siquijor, most of us grew up thinking it’s the land of witches and monsters. But really, it’s the complete opposite. It is an island of utmost beauty, inhabited by the kindest folks. I thought we have all been a victim of fake news for decades. Let me tell you why.

We were 10 minutes out from the port of Siquijor when I was woken up by people screaming. Some have gathered by the rails. I stood up to see why. Dolphins. I usually have to wake up early to catch a glimpse of them in the middle of the sea. But there they were, almost lunch time, just some hundred meters from the shore, happily jumping.

It was a short intermission, probably meant to make us look out. If they could talk, they probably would have said, ‘what are you doing there, sleeping? It’s so beautiful out here!’ And it was. The legends probably started here. Something this beautiful could only belong to a mythical island.

And that was just the beginning.

We took an island tour that literally took us around Siquijor, 360 degrees, stopping by tourist spots. We took our time, each was so enchanting, we found it hard to leave.

Our guide, Kuya Jinggoy (09065806033), doubled as photographer. He never once complained that we were taking too much time, or that we’ve had enough photos – not when we fed him lunch at 3pm (we lost track of time!), not when we were still on the other side of the island when the sun set. 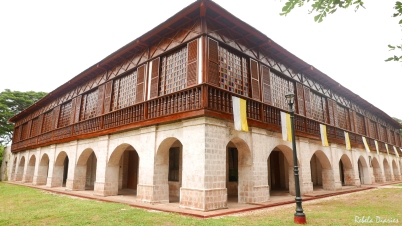 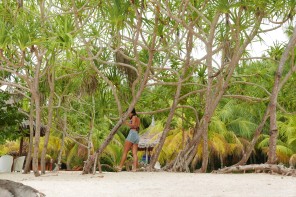 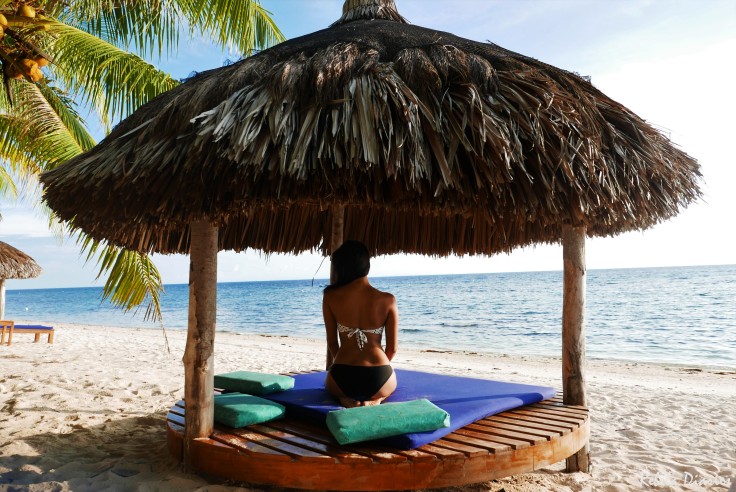 Eating out is always a treat in the island. Not because they have the best dishes, but because we get to talk to their awesome servers. That’s probably another reason for the myths. THEY ARE TOO NICE. Paranoids would think it’s their way of hypnotizing tourists. ‘Hello po!’ ‘Good evening po!’ ‘Thank you, ma’am!’ They say those in the gentlest voice and with the biggest smile. They exude kindness and warmth I’ve never encountered anywhere else.

It’s just a few minutes walk from the port!

A thought though, they could’ve all applied love potion. One seller told us these do not necessarily attract love, but they make people feel good just by talking to you.

And of course there’s the Balete Tree. Said to be at least 400 years old, it is the island’s most iconic landmark. It is also one of the main sources of horror stories. But really, all it has are innocent koi, very willing to eat away your dead cells. I wouldn’t want to be stranded around here at night though.

If you’re staying longer and just in San Juan, go to Paliton Beach on a separate day. It’s just about 20mins. and P20/pax away by tryk. We stayed there for an entire afternoon to catch the sunset. It was quiet, and a lot of fun ’cause there were just a few of us on one side of the beach.

But it also turned out to be a bad thing, when our pick-up did not arrive by 6 p.m. as promised, and we were left alone in UTTER DARKNESS.

I can’t even tell you how scary that was. Alone in the dark, in the island of creepy legends. We braved that photo just to document how truly dark it was. I’m not afraid of the dark, but I was afraid of all the eyes I felt looking the whole time, as if skinning me alive. I didn’t realize how much of a miracle it was, that we were able to get out of that place alive…. Until two months later.

When I started writing this, I really believed we imagined everything – the noise, the feeling of someone looking at us all the time. But a few weeks ago, I got to talk to my brother’s then-fiancé-now-wife. Inside a car, driving along a dark road, she told me her version of the story, and it is much creepier than ours.

She spent just one night in the island with some girl friends. They were louder than was probably allowed, and someone probably wanted them to shut it.

They were enjoying the night when they heard a low but distinct sound. Wak-wak, they call it. They say the lower the sound, the nearer it is. The sound went from loud to low, as the intruder flew(?) nearer. It was scary enough to shut everyone up. They were staying in a bamboo cottage, with no weapon at all, except prayers, and each other. No one spoke for the rest of the night, thinking the others were sleeping. In the morning, they found out no one really slept. Who could?

What do you think? Is it real? Aswang? Wak-wak? Mangkukulam? Do they exist? Is Siquijor the home for a lot of them?

I was going to break the myth. But I guess I failed.

Should it stop you from going though? I don’t think so. I still stand by my earlier words, they are the kindest and gentlest folks I have ever met. Even if the legends were true, I don’t believe they would harm anyone, unless you try to hurt them first.

Honestly, I’d still go back. Over and over.

One thought on “Siquijor: Trying, but failing, to debunk the myth”

Someone once told me, 'know the rules, so you can break them.' So here I am, breaking rules in the most beautiful places in the globe. Care to join?